React Native vs. Flutter: the key differences every developer should know in 2022 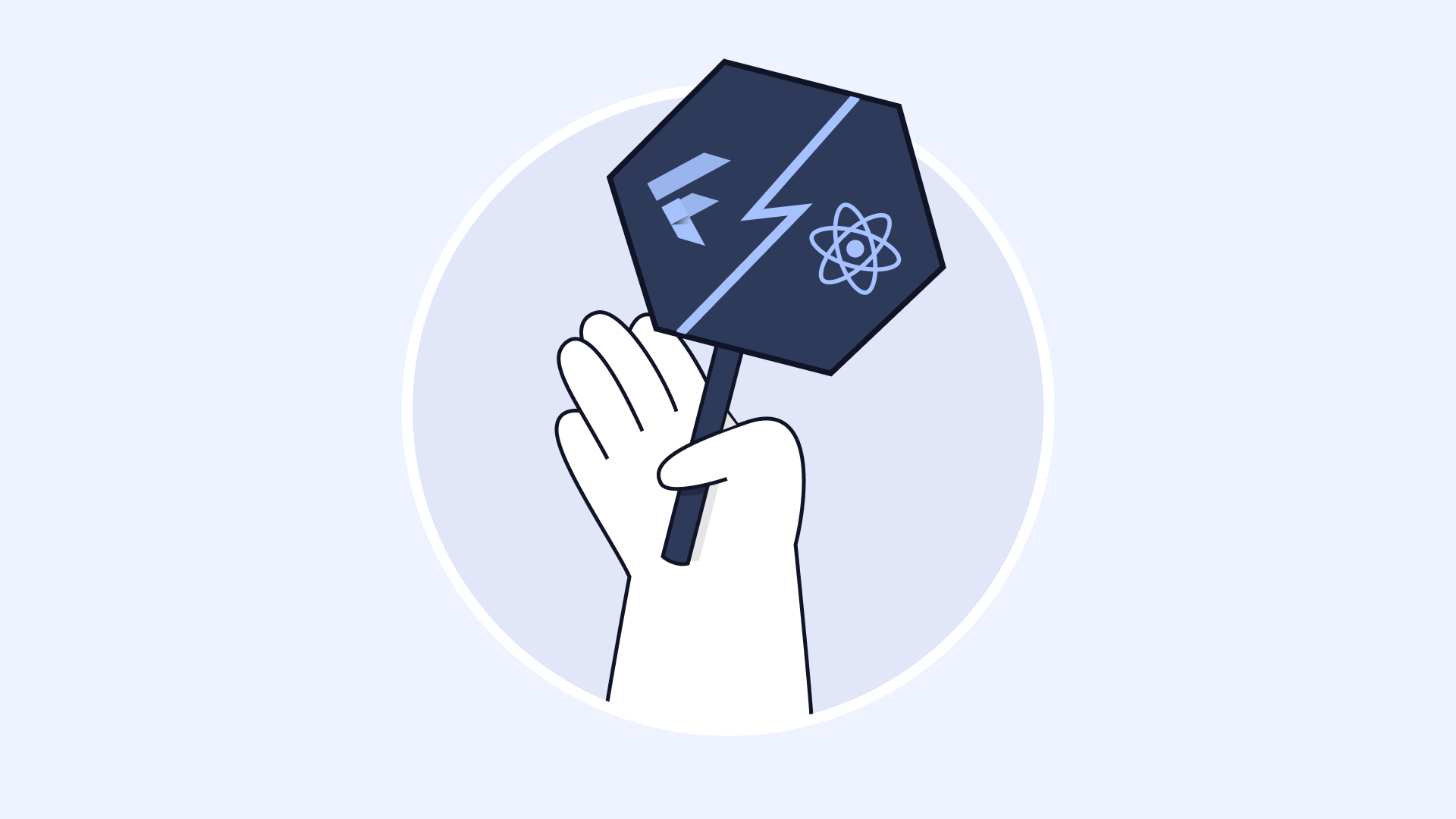 React Native vs. Flutter: the key differences every developer should know in 2022

However, the statistics don’t mean that the time of React Native passed and the framework lost its relevance. Instead, it continues to evolve its capabilities and remains an indispensable tool for cross-platform development.

But you are here to find out which is the best: mature and stable React Native or rapidly growing and performant Flutter. Thus, without further ado, let’s do it. In this article:

React Native and Flutter: the essence

React Native is a free and open-source framework for developing mobile, web, desktop & other cross-platform applications. But in contrast to Flutter, the performance is much better with the web apps.

The Facebook team released it in 2015, and it has much hype from the start. Its impressive tools set and performance brought the framework popularity and the devoted community of contributors. At present, Rect Native offers even more development capabilities and evolves into complete platform agnosticism, bridge simplification, and streaming model upgrade.

React Native uses React web development framework as a basis. RN uses JavaScript, TypeScript, and JSX programming languages basis which makes the platform easy to use for the majority of developers. React Native controls native rendering through Objective C/ Swift on iOS and Java/Kotlin on Android. React Native works with components to render the app natively on various platforms. The components are the substitutes of widgets. They are easy-to-use but look not as natively and aesthetic as the widgets.

Flutter is a Software Development Kit (SDK) for cross-platform development. Similar to React Native it is free, open-source, and allows developers to create all kinds of applications (mobile, desktop, various types of web apps, and more).

Google presented Flutter in 2018 as a beta version. Then, in 2019, after stabilizing the APIs and improving the system in line with the users’ feedback, the team announced Flutter 1.7. Since that time, the Flutter community has been growing rapidly.

Flutter uses the Dart client-optimized programming language. Like Flutter, it was created by Google especially for fast and complex applications. Dart is written with JavaScript and resembles it in a lot of ways. The language will be easy to learn for developers who have experience with JavaScript and C#. Apart from the language, Flutter's widgets enhance the rendering performance and cross-platform capabilities of the platform.

In this section, we will compare performance metrics and features of the two frameworks.

In terms of architecture, React Native and Flutter have much in common. Flutter has similar structural elements except for the Bridge and the programming language. It makes the performance of Flutter applications better than React Native ones.

As we said, React Native has a slightly more complex structure than Flutter. Also, it includes some unique structural elements like JS input.  With RN, you can use multiple UI/code frameworks, libraries (Ignite CLI, Native Base, UI Kitten), and native modules to streamline the development process.

The community is a vital factor for a cross-platform development framework. One way or another, you will encounter issues you won’t be able to resolve by yourself. What’s more, the popularity makes it easier to find an experienced and creative developer to create your app. In such cases, you can reach out to the community and get the support you need.

Despite the Flutter’s young age and fledgling status, it has a mature community. Additionally, there are quite a lot of open libraries where you can find various functionalities. It would be fair to say that these libraries don’t contain all the functionalities you might need for your application. Thus, you’ll have to create them by yourself. But, the extension of the libraries is just a matter of time for the Flutter team and contributors.

The Flutter community grows rapidly but doesn’t catch up with React Native’s level of support. RN is three years older than Flutter and had its time to gather up a significant group of contributors and fans. Moreover, it has been dominating the cross-platform development area until 2021. So, there’s no surprise that React Native has a stable community and comprehensive knowledge base. Besides, RN offers an unprecedented number of ready-made functionalities and component libraries.

With Flutter, you can build iOS and Android apps using a single codebase throughout iOS, Android, Windows, macOS, Linux. Also, you can create web apps for Firebase, Chrome, Safari, and Edge. Apart from that Flutter apps can be embedded with TV sets, cars, and smart home devices. However, sharing code in web environments can be quite challenging, considering the overall weak performance of Flutter there.

Out-of-box you can reuse RN code across iOS and Android devices.  However, with the help of special libraries, you can apply the single code to the same platforms as Flutter.

Another way you can share the RN code is to inject it as a dependency. To do that, you need to extract the code you share and to a separate repository and treat it as a separate project.

The method allows developers to focus on the development of a platform-specific application without any concerns about compatibility with other platforms.

As both RN and Flutter work in several different environments, we will compare their performance in each of them.

Flutter performs various kinds of tasks much faster than React Native. This difference boils down to the architecture of the platforms. React Native has the Bridge element that takes its time and resources to translate the JS code into native platform-specific languages.

At the same time, Flutter doesn’t need any additional interlayers. It takes load from a device and streamlines the application performance. Also, Flutter has a powerful C++ visual engine that makes the rendering of mobile apps seamless and detailed.

React Native desktop applications perform slightly better than Flutter. For example, an RN app can generate random DNA sequences only in two seconds and consume 71 kb of operational memory. In contrast, it would take 6 seconds and 159 kb to execute the same operation.

Widgets and Dart UI capabilities win the game for Flutter in the rendering competition. They are based on material design and give developers more freedom of expression in UI development. Further, the Flutter applications will look the same on the newest and older devices. Flutter mobile apps look more like hybrid applications made in Ionic or Xmarin than native.

React Native uses platform-specific graphic blocks to build UIs. It uses JavaScript and React instead of native languages (Java, Swift, Kotlin, etc.)  Besides, React Native employs Virtual Dom instead of using Web Views to render the interfaces. It enhances the rendering performance, optimizes a device’s memory usage, and makes an application lighter. Virtual DOM is especially useful for web applications rendering. And, finally, React Native uses native UI components so they update together with the iOS/Android app without any delay.

Eventually, both platforms are capable of pixel-perfect and seamless UI rendering. Flutters’ lack of native look is compensated with the vast styling features. At the same time, React Native’s native look and performance are slightly overshadowed by the lack of style variety.

With React Native and Flutter, developers can reduce testing time by half. It is possible because QA specialists can run the same test on two mobile platforms. Although, the applications for both platforms should be identical. In other words, the more similarities between the applications, the less testing they require.

React Native supports the IDE software suite, which opens wide testing automation capabilities. So, developers can choose from Espresso, Jasmine, KIF, Appium, Calabash, UI Automation, Robotium, Frank, TestNG, and more. The weakness of React Native application testing is that you won’t have any support or documentation for the testing routines.

Flutter testing has three categories: integration testing, unit testing, and widget testing. As opposed to RN, all three categories of testing have the support and detailed documentation. Dart programming language is great for non-UI testing because it runs on your development hardware. Also, Dart has vast testing automation features and tools like IDE (debugging), DartDevTools, and Continuous Integration (CI).

When to Use Flutter and React Native

Opt for Flutter in the following cases:

Google ads mobile app helps managers track their advertisement campaigns on the go. The functions of the application are:

This application helps car owners and vendors to sell their vehicles right from their smartphones. It allows users to:

The app allows users to control the light in their room. To perform its functions the application includes:

React Native perfectly suits you in the following cases:

Unsurprisingly, the company demonstrated the capabilities of its framework, creating Facebook social media mobile app for Android and iOS. Among the application’s features are:

The largest retailer in the US, Walmart, entrusted its mobile app to the React Native developers. They’ve created a functional app capable of:

The world’s best photo/video-sharing platform is also made with React Native. The app has:

Now, it’s time to summarize all the facts about the frameworks and decide which application is better. It's up to you and the choice depends on your application requirements. Both React Native and Flutter can give birth to performant and rather fast cross-platform applications for different devices. Both of them offer cool features like hot/live reload that enhance the development process and have exceptional UI rendering capabilities.

However, the frameworks differ in structure, cross-platform development approaches, programming languages, and the capacity for design and styling.

Hope this comparison helped you to choose the appropriate cross-platform framework for your new application. Good luck!

P.S. If you still have questions or want to delegate your cross-platform development to a solid and experienced team of developers, contact us. Akveo provides the full cycle of services including app development, UI/UX & web design, branding, quality assurance, and technology consulting.

This is a locked content block.
Submit your e-mail to get access.
Thank you! Your submission has been received!
Oops! Something went wrong while submitting the form.
React Native
Mobile
JS
Web
UI/UX
Tools
All Topics

React Native
How to hire a dedicated React Native developer in 2022: the ultimate guide
Max Tsurbeliov

React Native
How to hire a dedicated React Native developer in 2022: the ultimate guide
Max Tsurbeliov